Writer’s Note: I have added a Tableau Public version of the data used here that is very interactive. Follow this link

With Austin Krajicek reaching a career-high #121 in the world, I decided this was a good time start looking into the current top-level Americans and where we stand.

Let me start by saying I am just stunned by the fact that Austin has surpassed Ryan Harrison in the rankings. I am not sure how long this will last, but Lefty has really outperformed ‘my’ expectations. Congratulations to him. I always thought his left-handed, slicing game was unique. When he is serving well, he is a tough out.

But as we head into the clay court season, American fans can start to expect the inevitable mantra of the media — Where Are The Americans? This will evolve into stories about failures in player development throughout late April and May until the declaration of the Next Great Hope, when a young American advances to the semis of the Roland Garros Juniors.

I hope to provide a little insight into where these current Americans stand. I know most people prefer to see something visually, so I have included several charts and graphs. 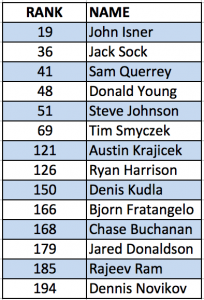 This will be at least a two part series. Today I will focus on what we have now. In a later piece I will give some ‘comps’ on other players worldwide.

Right now we have 14 Americans in the top-200 of the ATP rankings. I admit, I arbitrarily selected top-200. That and the fact if you are near the top-200, you are in the running to get into Grand Slam main draws. 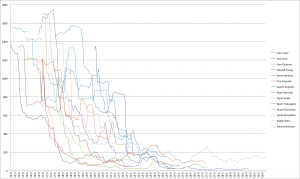 From the graphic above (click it to enlarge), you can see I have charted each American by ranking at his exact age (year-month). Obviously there is more than one ranking period in each month, so I have averaged them to form a single entry for that ‘age’.

In the United States, our players develop differently. Some start playing ITFs early, some don’t. Some play periodically and play college tennis and some go full-time pro. You can see this in the spaghetti portion of the graph on the left side. (You can also see gaps where guys get injured or take breaks for college).

To get a closer look, let’s break this out into a couple of groups. I will call them the Young Guns and the Old Timers. 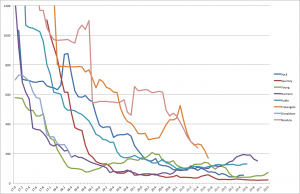 Led by Donald Young, the Young Guns all appear to have reached some level of success early. Of these, only Novikov attended college.

Look closely at how they’ve ‘matured’. All of them reached some early success, but you really can see those who climbed the rankings earlier, like Young and Harrison. Donaldson is right there with them. A little bit later you can see Querrey, Kudla and Sock. Novikov and Fratangelo seem to be running at about the same pace. They also both seem to make these dramatic leaps every once in awhile.

Have Querrey and Young ‘peaked’? This graph only shows up to their 23rd birthday. Each has had a few ups and downs since and are currently sitting just inside the top-50. Young is about 25 and a half, while Querrey is a little past 27. Both have a good seven-to-ten years on tour left in them, if they can stay healthy. But how high can they climb? Querrey got as high as #17 back in 2011. Young is near his career-high of 38, which he reached in 2012.

Does Harrison have another run in him? He’s a curious sort, having seemingly been around forever. My memory is probably warped since I have known him since he was about 13 years old. This is a critical time for him and he needs to take advantage of it. A career-high of only 43, I think he can get into the top-30. I like that he and Grant Doyle have rekindled their partnership.

To me though, the most interesting one is Donaldson. Having taken the fast track, he has reached the top-200 by the age of 18 years and four months. Only Donald Young has done this faster in this group. Harrison achieved it at the exact same time. Where he goes next should be fun to watch over the next couple of years. 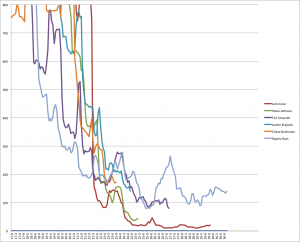 I cut this one off since they were later-bloomers. Other than Smyczek, they attended college for at least a period.

Rajeev Ram is the outlier here. He actually reached the top-200 earlier than the others, but never really stuck and bounced around, despite not being out of the top-300 for almost 10 years. He’s the definition of a grinder, only dipping into the top-100 but never really going away.

Isner’s ascendence was almost instant after graduating. Think about this: he didn’t even earn a single point until AFTER he was 20 years old. Heck, I was on the court taking photos when he lost in the second round of the NCAA’s his freshman year to Travis Helgeson. Then in one crazy summer he jumped about 700 places. Isner is an easy top-50 player. He’s lived in the top-20 for a long time and had a drink in the top-10. With his serve, he is always a threat, but how long much longer can he do it?

Smyczek’s career arch mirrors Ram’s quite a bit, however he has been dancing around that top-100 spot for almost a year now. He’s had quite the streak this year already, but started struggling this month. Getting prepared for the American summer will be key for him.

Buchanan, Krajicek and Johnson. What can you say about these three? They each are having success right now after some time in college. Stevie J. is a beast. I’ve watched him in person and once saw him trash a young Soren Hess-Oleson, 6-0, 6-1, from court side.

Buchanan is right there, but still has yet to make the top-100. What is his upside? Can he maintain his current position. Like Smyczek, this summer in the U.S. will be critical to his long-term development.

And then we are back to Krajicek. I am impressed with what he has done this year. He’s taken a less-dramatic path in the rankings than Smyczek, but reaching the same targets over time. I am anxious to see where he takes it.

NEXT: U.S. versus World — How these players stack up?

Acknowledgement: For years I have been tracking this data myself to some extent. I am grateful, however to Jeff Sackmann and the tennis repository he has accumulated at GitHub.

With the announcement of Shaka Smart as Texas’ new men’s basketball coach coming as I write this, I thought I would put a few keystrokes down on how the two coaches teams have fared since 2009, when Shaka took over at VCU.

Since I wrote about luck (Pythagorean Luck) earlier in the week, let’s start there. I also want to point out that all of these number utilize regular season data.

As you can see by the graph, Smart’s teams seem to always outperform Barnes’. It is so bad that while Barnes’ teams only performed above expected values only in 2014, Shaka’s were consistently above expected. This is very comparable to Duke over the same time period.

I’ll start with a few definitions. These are taken pretty much directly from Ken Pomeroy’s website.

Adjusted Tempo – An estimate of the tempo (possessions per 40 minutes) a team would have against the team that wants to play at an average D-I tempo.

Adjusted Offensive Efficiency – An estimate of the offensive efficiency (points scored per 100 possessions) a team would have against the average D-I defense.

Adjusted Defensive Efficiency – An estimate of the defensive efficiency (points allowed per 100 possessions) a team would have against the average D-I offense.

Stats comparison between VCU and Texas since 2009

When we talk about adjusted tempo, VCU has played faster than Texas, especially over the last three years. This is probably due to his ‘Havoc’ defense. I am actually a little freaked out by the huge difference this season. That seems a little out of whack. Was Texas really just that slow?

When you look into Adjusted Offensive and Defensive Efficiency, Texas appears to seem pretty similar and a little better for the most part. The fact they are similar in all of these stats boils down to them both being defense first teams.

Both teams’ offensive efficiencies are above average (about 95.5). The average defensive efficiency during this time is a little greater (95.9). <why they aren’t the same is a discussion for another day>

One reason for Texas’ superiority in adjusted defense may be the way the statistic is calculated, giving weight to the opponent’s perceived strength versus the average. It is also interesting to note that Texas has much better numbers here in 2011 than VCU’s Final Four team that year. That would be the year Texas squeaked past Oakland before being upset by Arizona.

Who knows what the future brings? I expect Texas to be more exciting to watch, as they try to wreak havoc on their opponents. The Big 12 season is long and treacherous and never easy. The first West Virginia v Texas game should be exciting, as both teams will probably press for 40 minutes.

No matter what I have here, in the end, the only numbers that will matter will come in March.